Telecommunications
The union of communications and computers.
Transmitting and receiving data over a long distance. ("tele" is a Greek word meaning "far off")

Network
Network = Computer system that uses communications equipment to connect two or more computers and their resources (LAN, MAN, WAN)
Standalone computer (PC) has its own local (cf. remote) resources
Network workstation
Network server = a network resource = Distributes or serves application programs and data files to workstations.
Node = each device on a network = network resource
User ID = user name
User password = secret code for security purposes = Should be changed regularly = Should be impossible for anyone to guess what your password is = Must never be shared with anyone = If you think someone may know your password, you must immediately change it.
User account = access to network resources
Print server = Data files sent to your workstation's parallel port (prn, lpt1) are captured and redirected to the network printer and placed in a print queue until they are printed.
NIC = network interface card = a small circuit board
Network types: Ethernet, Token Ring, ARCnet, FDDI, ATM
Dedicated file server = serves programs and data files to the workstations where the programs are run and the data are processed = PC or minicomputer or mainframe = Network may have more than one dedicated file server
Non-dedicated server = peer-to-peer capability = both file server and workstation
Client-server architecture = Application server = Computer that runs application software and forwards the results of processing to workstations (clients) as requested, then the workstation can further process the data.
Host computer = Minicomputer or mainframe = Accessed by (dumb) terminals with no storage or processing = A PC can pretend to be a (dumb) terminal by using terminal emulation software = Time-sharing system
NOS = Network Operating System = Control flow of data, maintain security, keep track of user accounts = (e.g. Novell NetWare, MS-Windows, Banyan Vines, Lantastic, UNIX, OS/2, etc.)
Network server software = installed on a file server
Network client software = installed on each workstation = Device driver for the NIC
Workgroup

Standards
Network Standard = a set of communications protocols for orderly transmission of data
Ethernet uses CSMA/CD (carrier sense multiple access with collision detection)
Token Ring and ARCnet use a token signal to indicate whether the network is available to carry a packet.
FDDI, ATM, Fast-Ethernet

Communications Protocols
Rules that ensure the orderly and accurate transmission and reception of data (e.g. TCP/IP)
Even-parity Error-checking protocol = the number of 1 bits in a data block (including a parity bit) is an even number = If the number of 1 bits is odd then the receiver requests that the data block be transmitted again.
Synchronous protocol = the sender and the receiver are synchronized by a signal called a clock so the data are sent at a fixed rate.
Asynchronous protocol = Sender transmits a start bit, the data block, and stop bit(s).

Packet Switching = a message delivery technique that divides a message into smaller units called packets. Each packet is addressed to its destination, but it might travel a different route than other packets. At the receiving end of the transmission, all the packets are gathered and reassembled. (See Notes on TCP/IP):


Bandwidth
What is Bandwidth?  (www.whatis.com)

Bandwidth = capacity = a measure of the amount of data a channel can carry = the number of frequencies that can fit on one communications line at the same time = a range of frequencies; the difference between the highest and lowest frequencies in a channel. 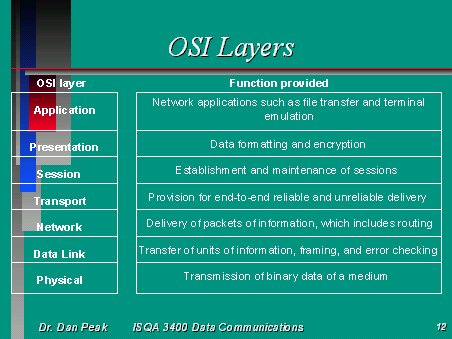